This column first appeared in the San Antonio Express News on May 31, 2016. To read this in the Express, click here. 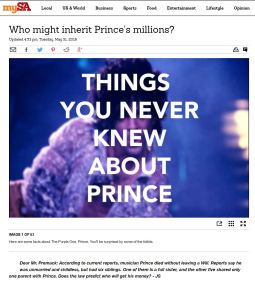 Dear Mr. Premack: According to current reports, musician Prince died without leaving a Will. Reports say he was unmarried and childless, but had six siblings. One of them is a full sister, and the other five shared only one parent with Prince. Does the law predict who will get his money? – JS

The court hopes that the family will still locate a Will made by Prince. When there is a Will or other valid legal pre-disposition of a decedent’s property, the family and the courts have a much easier task. The court would appoint the Executor nominated in the Will. The Executor would know exactly to whom the estate was to be distributed as specified in the Will.

If no Will is located, his estate will be administered under local intestacy laws. Dying intestate leaves all sorts of unanswered questions. State law provides the framework for a solution, leaving it to the court to determine the facts and apply the law.

Prince died in Minnesota. The first heir would be a spouse, then children. If none, next to inherit are the parents of the decedent. Prince’s parents must both be deceased, because the only reported claimants are six siblings, one who shared both parents and five who shared only one parent with Prince. State law in Minnesota gives relatives of the half-blood the same inheritance they would receive if they were of the whole blood. They are treated equally.

If he had died intestate in Texas, what effect would the full-blood and half-blood relationships have on the distribution of his estate? The opposite of Minnesota. Here, each of the siblings of the half-blood inherit only half as much as do siblings of the whole-blood.

Why should there be a different outcome just because of the state in which a person lives? Each state’s legislature gets to determine local inheritance laws, and sets different priorities. There is no nationwide standard, except for the global idea that we each have the legal right to write our own plan that overrides state law. The take-away for you is this: Do not emulate Prince’s failure to make a legally binding plan. We all work hard to accumulate assets. Take action now by consulting with a qualified Elder Law Attorney about making a binding estate plan.

Paul Premack is a Certified Elder Law Attorney with offices in San Antonio and Seattle, handling Wills and Trusts, Probate, and Business Entity issues. View past legal columns or submit free questions on legal issues via www.TexasEstateandProbate.com or www.Premack.com.

This site uses Akismet to reduce spam. Learn how your comment data is processed.