This column first appeared in the San Antonio Express News of June 7, 2016. To read it in the Express, click here. 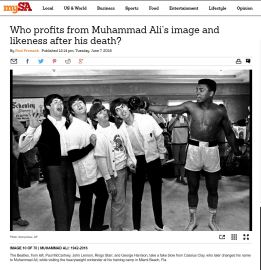 Dear Mr. Premack: I was reading on NBC that when Muhammad Ali died last week, they expect that sales of merchandise with his image will increase. The article noted that he earned millions during his life by selling an 80% share in licensing his name and image to a media company. What are the privacy laws now that he has died? Can they just keep making money off celebrities forever? – B.W.

People like to be associated with achievers, events and images. Mass merchandising of celebrity images is a huge business. Ali, who died on May 30, recognized that his image had great value. Even in his later years, while suffering from Parkinson’s Disease, he teamed with groups like the Michael J. Fox Foundation to raise funds to find a cure for the malady.

Of course, the contracts under which he licensed the rights to his image and name are private, so I do not know the terms. But generally, the law states that a person owns their name and image, that it cannot be used without permission, and that those privacy rights continue to apply after a person dies.

In Texas, the Property Code says that you own your name, voice, signature, image and likeness. You have the right to sell or transfer those rights – either while you are living, as was done by Ali, or upon your death via your Will or a Trust. If you do not assign this right in your Will or a Trust, the law transfers a one-half interest to your spouse and a one-half interest to your children upon your death. If the rights are split among many people – say your spouse and three children – then majority rules to decide how to use those rights. A claim to ownership of these rights may be filed by the survivors with the Texas Secretary of State.

Most of us are not celebrities, and do not feel that our image or signature has much intrinsic value. But that depends on the circumstances. In about 2007, Virgin Mobile (the cellphone company) used a young woman’s image in a Texas ad campaign. They got the image from a non-copyrighted “creative commons” source, so using her picture did not violate copyright. Still, she was uncompensated and did not agree to the use of her image in the ad campaign, and filed suit against Virgin Mobil for illegal use of her property rights.

The Texas law does not apply to anyone who died before 1937. So under Texas law, it may be legal to use the image of someone like Will Rogers, who died in 1935. But it would not be legal to use the image of George Gershwin, who died in 1938. Ali sold those rights, so the contracts will pass to the heirs he named in his Will or Trust – and they should have the economic benefits from his image for many years to come.

Paul Premack is a Certified Elder Law Attorney with offices in San Antonio and Seattle, handling Wills and Trusts, Probate, and Business Entity issues. View past legal columns or submit free questions on legal issues via www.TexasEstateandProbate.com or www.Premack.com.

This site uses Akismet to reduce spam. Learn how your comment data is processed.